I am thrilled to tell you that now that Alli is in school and I am afforded a little more time, I am diving headfirst into my new cooking projects - First up, Cha Cá Chiên. I am using the Vietnamese name for this meal because the English translation isn't at all appetizing - see how yummy they look.... 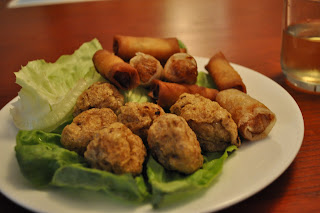 and don't they sound exotic and delish when I call them Cha Cá Chỉ̉ên? Now, how would you feel if I told you they are fish balls? See??? I told you so. Now, to be clear, these are more like fish cakes than anything else.
The ingredients - fish, chopped scallions, salt, pepper and "the magic pellets". I don't know what to tell you about magic pellets - they look like this... 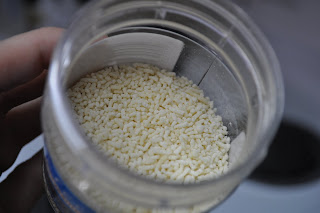 My gal Friday/Moneypenny/Ty doesn't really think they have an American equivalent and she told me to just put them in when cooking, so I did what I was told. They came to my house from our former cook in an old Woolworth's peanut butter jar. Also, when I asked Ty what kind of fish it was, she told me, "the good kind" and when I asked where the fish came from, she said flatly, "the market". Sometimes I can't tell if Ty is incredibly sarcastic or just unable to understand what I am saying in my broken Vietnamese/English mix. But she is a wonderful teacher in the kitchen and laughs hysterically at my attempts at cooking. Also, we are learning to "speak" each other's kitchen language as she, like most good home cooks, doesn't measure ingredients or time the process.

After said ingredients are mixed together, they are fried. Bring on the judgment! And so maybe not the healthiest meal, but with a toddller in the house, I am trying to slowly expand her culinary world and also learn to cook traditional Vietnamese foods and while the Vietnamese do eat very healthy foods, they also can fry the heck out of anything!
I served them with Ch̉a Giò ̣̣(Vietnamese spring rolls), which will warrant a ViêtNosh post of their own. Cha Giò are a staple of Vietnamese cuisine and vary in ingredients and flavor. Mine were not home-made but frozen and also...wait for it.....fried.
I planned on taking pictures of ingredients, steps, etc. but it turns out I can't cook and shoot at the same time...perhaps a tripod would solve my problems? Lets be honest though, you certainly aren't tuning in for technique or pointers, am I right?

So there you have it. I am super proud of myself and thrilled over what is basically very fancy, made-from-scratch, fish sticks. Baby steps, people, baby steps.
Ratings -

out of 5 lotus flowers - easy to prepare, super easy to cook and two thumbs up from a picky toddler - way too chewy for my own taste.
Posted by meredith at 09:20