Operation Soothie (and Other Lies We Tell Our Children)

Allison has used her green pacifier (aka Soothie) since she was about 5 months old and historically only used her Soothie at nap time and bed time. Aside from that, the Soothie stayed safely ensconced in her room, so in my mind, no harm, no foul.
In the last six months, a great deal of change has been introduced into Alli's life. We moved in with my parents, she became a big sister, Mommy got sick, Daddy left for post, we moved to Vietnam. Makes me want to get my own Soothie. During this time, the Soothie began making guest appearances during the day and in the last two weeks, I decided that enough was enough.
So yes, as we approach 3 and the coveted status of "big girl", it was time to rip off the band aid, so to speak - no more Soothie. Cue the Soothie Fairy. First, you write the Soothie Fairy a letter. Then, the Soothie Fairy visits your house while you sleep, removes said Soothie and leaves you a very special, big girl present. 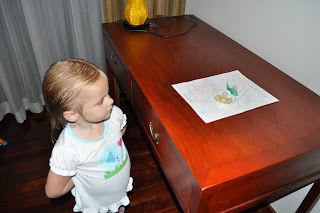 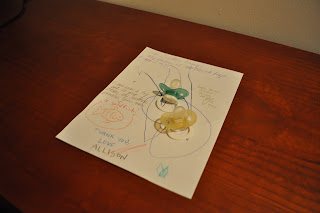 (Dear Soothie Fairy, My name is Alli Russell Page. I am 2 1/2. I am now a big girl. If you take my soothie, please give me a goldfish! Thank you. Love, Allison and also please bring Daddy a toy.)
So this past Monday, the Soothie Fairy visited our house, removed the Soothies (Green Soothie and the backup, broken Yellow Soothie) and left this in its place:

Depending on the time of day, the fish is called Alli, Dorothy or Peanut Butter Sandwich. I understand from Allison that the fish is 2 1/2 and was born in a land called "Coco" which is also where, apparently, Daddy was born.

It has been a rough couple of days for the members of Operation Soothie. Allison went on a sleep strike and stayed up the entire first night and skipped her nap the next day. Since then, she actually did pass out and has had 2 fairly successful nights of sleep and 2 fairly successful naps. I am proud of her because I know it was a hard thing to give up, which is obvious from these pathetic and endearing pictures. 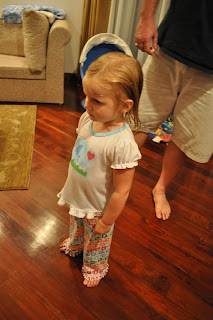 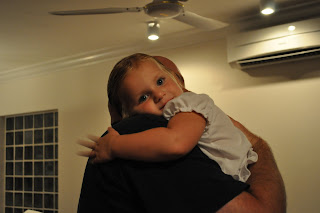 RIP Green Soothie - next up, Potty Training (aka Why Mommy Drinks)
Posted by meredith at 04:17