I have started taking tennis lessons after a very, very, very long absence from the courts. Like, say, 10 years? I was gifted with a new racket, shoes and lessons for my birthday and have loved getting back on the courts.

My coach, Ms. Lan, is a cross between these two:
Bela Karolyi 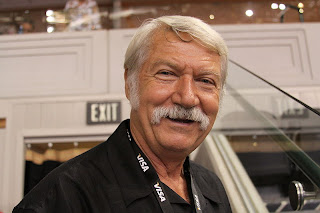 My tennis style is a bit of a mix as well - one part sweaty Andre Agassi, one part foul-mouthed John McEnroe, one part grunting Monica Seles - pretty, right?

We play twice a week - once on Monday nights and once on Friday afternoons. It is an hour of hard core exercise. And it is wonderful! It is also quite funny because Ms. Lan and I don't communicate much or very well, but she does yell out after each shot, "Good!", "No!" or "Lucky!".

On Monday nights, the court next to mine is occupied by two very nice Japanese men, and I don't speak any Japanese, but I am fairly certain that one of them tried to pick me up last night when he said, "You strong for woman, yes?". Yes sir, I am. Anyone out there who has played tennis or golf (Hi Dad!) with me knows that while I have some really stellar shots, I mainly have seriously insane, WAY too long/out of bounds/high shots. I really think that I may have missed my calling to play women's softball in college. Maybe next time.

I have done some preliminary research on the senior tour for Wimbledon and I know it is a long shot, but it helps to have a goal. And who doesn't love to root for the underdog, right? I figure with sponsorships from diaper companies and vineyards, I will be the player to watch.

I fully intend on asking the Williams Sisters to dress me. I am thinking something along these lines..... but a little less conservative. Because when it comes to fashion and tennis - there is no substitute for the Williams Sisters.